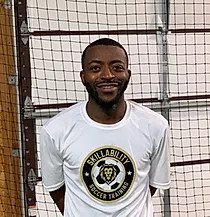 Emmanuel “Eman” Nfor was born and raised in Cameroon, Africa before moving to the U.S.A with his immediate family when he was 12. He’s played soccer his whole life and continued in Frankfort, Ky once his family arrived in the United States.

After playing at Western hills high school, he attended and played collegiate soccer at Campbellsville University. He then returned to Frankfort where he would start his coaching soccer; he worked as a head coach at Frankfort fury, Bondurant middle school, and then took over as the head coach of his old high Western hills for three years after two years as the Jv coach.

Emmanuel now resides in Louisville, Ky where he is currently the General Manager and President for one the city’s and state’s most historic and successful youth soccer clubs United 1996 FC, and is the former head girls soccer coach for Eastern High school.

His ultimate goal is to become a collegiate soccer coach and to make a positive impact in the livese’s of the people and players he comes across and works with.”