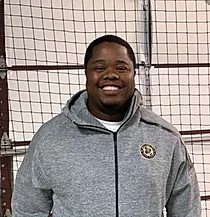 Lwandiso “Ace” Gonya was  born and raised in Cape Town, South Africa. Played for then professional academy side Santos FC u13 and u15. Went on to play for 1st division side Hanover Park (senior team) and lead them in goals for 2 consecutive seasons at the age of 16 and 17.

Ace moved to the US in 2009 after being scouted by Lindsey Wilson college, where he played and won 2 national titles and a few individual awards. He then went on to play pdl soccer and competed in the Lamar Hunt US open cup in 2013.

In 2016, he became their pdl assistant coach for 2 years, then formally became their head pdl coach in 2018. Between all that, Ace has been coaching at Walden middle school where he started in 2016 and is presently also head coach at Ohio Elite – Kentucky/Elite FC